Why you must have it?

What is Green Oxygen?

Because you have to breath!

This is a first of a kind solution for the massive and free growth and arrangement of house plants, in the interior with minimum energy consumption and cost. The system is intended for the general public, easy to operate, user friendly, without previous qualifications required. On the other hand can provide professional solution for the experienced House Plants Expert. Or hobby leisure time grower.

The Problem: House plants need certain amount of effective sunlight to maintain the Photosynthesis process and keep growing. More ever, different plants need different “day-length” in order to receive flowering induction or other seasonal biological processes. Customary in doors lighting is not effective to the plant and lacks the intensity and the correct spectrum of light needed by the plant and which the sunlight provides. Therefore today the growth of house plants is limited to the proximity of large window or in balconies.

The Solution: an innovative series of products that reduces the dependency of plants on sun light, and climate outside the walls of the interior. The specification of the product includes the lighting device, adjustable stand or hanger, and instruction manual. Included in the product is a user friendly, easy to operate controller-timer for the scheduling of the lighting cycle and duration, and a photoelectric sensor designed to sense the surroundings light intensity and stops it’s action whilst enough sun-light or other efficient light is available in the correct intensity and spectrum. Decorative and elegant design. All the above mentioned create a pleasant assembly experience, and pleasant and efficient use. The product is suitable to all kind of users without any experience or previous training in the domestic, office, architectural, and institutional sectors. It ensures a permanent growing healthy and fresh looking plant in any place of the interior, without the traditional disappointment of fast wilt and decay after a short period without the adequate sunlight. The programmable professional functions of the device controller with an application to mobile phone, make it also an ideal device or the professional grower who requires complete Sun light Substitutes features like day length and seasoning and scheduling flowering cycles.

Indoors Agriculture – perfect for growing vegetables in pots (cherry tomatoes, cucumber, etc.), medicinal plants, and spices amongst others anywhere in the interiors.

Does the lighting of the plant indoors, require application of more water for irrigation? And what about fertilizers?

Application of large quantities of water is not always good and can be dangerous in excess, suffocating the plants root system. A good parameter for irrigation and maintenance of optimum humidity without excess is to irrigate the pot plant until 10% of the irrigation water is drained to the bottom collector plate. Schedule next Irrigation when the collector plate has dried completely. Fertilizers application should be done by application of slow release or controlled release, all in fertilizers, or dissolving fertilizers in the water application, by measured concentration according to recommendation. Avoid large or excess application of chemicals at once.

What maintenance should I give to my Wekah-Sun Device, and when?

No need for any maintenance, just cleaning the dust from time to time.

I am going to be away from home on a trip for one month. Should I do something to the devise or program?

No, just check that the device is plugged in and operational in the desired program. The device will work automatically.

What happens during and after a power failure should I reprogram my Wekah-Sun Device or do anything else?

Are there preffered plants or flowers that will grow better inside the house?

Yes, Plants divide in 3 basic groups: C2 are plants that grown in darker shaded environments in the bottom of the woods, under trees, and their light demands are minor. C3 which is the average normal plants that need fair sunlight and C4 which in addition have a more efficient photosynthetic process that requires less water and need a lot of illumination. No plant what so ever cannot grow with no light at all. The WEKAH-SUN device gives service and solution to all 3 categories.

Is there an importance o the direction of lighting on the plant and growth?

Yes. Direct light from above will create more straight and symmetric growing of the plant, without deviations to the sides. However it is recommended to change the angel of light occasionally to the sides of the plant to give it more volume and width growth.

Does your apparel exonerate me from any treatment and maintenance to the plant?

The WEKH SUN ARTIFICIAL LIGHTING Device for plants enables plants to grow successfully, without decay or suffering from lack or sunlight. Therefore it is a Sun light substitute. It does not substitute the need to irrigate, fertilize and other necessary agronomic normal practices needed by the plant, specially watering.

The sun light in the outside lights all the plant while the " WEKAH-SUN" lights only part of the canopy.

Fortunately we could read from the literature and also discover during our research and development process that plants don’t need full coverage. They can settle for some main parts illuminated, compensate and send the absorbed biomass to the rest of the plant’s parts. Likewise ,In nature, the lower leaves receive less light because they are covered by their younger and upper brothers.

What is the meaning of the length of the lighting cycle or "day – length" to the plants and physiological processes like flowering and fecundation?

Plants have an internal biological sensor mechanism called PHOTOPERIODISM, which monitors the length of the day and change of seasons, as indicator to the plant when to flower. With the WEKAH- SUN device we can imitate different day length, and create flowering induction to plants.

Why is the normal light of the light bulbs from the ceiling and walls is not sufficient for plants?

The efficient light spectrum for the plant is mainly in the Red and Blue wave length between 450-700 Nanometers (see diagram below). The light from normal house bulbs has smaller portions of this spectrum and rather larger portions from spectrums not efficient to the plants. Also the Light intensity is not strong enough and the intensity is diming in a geometrical column as you get farther from the bulb. So if you want the plant to feel some light you must lift the plant until it is annexed to the bulb. In normal conditions the plants cannot feel the light from the bulb because by the time it reaches them it’s intensity is too weak.

What is the photosynthesis process in plants and how is it related to the sun?

This is an energetic process where some of the light spectrum in the sun light is converted in the plant’s leaves to biomass by capturing CO2 from the atmosphere water(H2O) coming from the root and creating organic matter after liberating Oxygen to the atmosphere . Without the photosynthesis process no growth is possible in plants, and our atmosphere will remain saturated by Carbon Dioxide without possibility for Life existence. See Diagram below: 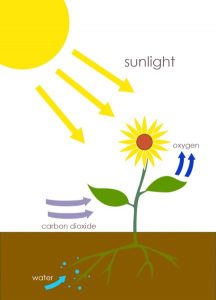 -Watt – A standard unit of measurement equivalent to one joule per second and equal to the power in a circuit in which a current of one ampere flows across a potential difference of one volt.

-Light emitting diode (LED) – These are semi-conductor devices that put out light when current is run through a substrate. Different substrate materials are used to give us the various color outputs. These may either be monochromatic (single color) narrow band emitters or white (full spectrum). Due to the relatively low heat, long life and ever-increasing efficiency, they are gaining popularity as grow lights.

-Light saturation – There is a limit to how much radiation a leaf can process. Saturation is the point at which increasing light intensity will no longer produce an increase in photosynthesis. Going beyond that point results in a burned condition known as light bleaching.

-Lumen – the amount of radiant flux as perceived by the human eye. This measurement is not very useful for determining a good grow light as plants ‘see’ light differently. See: Radiant Flux.

-Lumens per Watt – The amount of radiation in lumens converted for each Watt of input energy consumed. See: Luminous efficacy.

-Luminous efficacy – The conversion rate of input energy into usable light expressed as a percentage.

-Lux – A unit of illuminance equal to 1 lumen per square meter.

Life expectancy – The average number of hours a light will last before it drops below 50% of initial lumens. HIDs generally have a life expectancy of 10,000 to 20,000 hours with LEDs lasting up to 50,000 hours.

-Micromole (µmol) – A millionth of a mole (interchangeable with a Micro Einstein). It is a measurement of the amount of PAR photons striking a square meter per second.

-Photosynthetically active radiation (PAR) – Light wavelengths between the 400nm to 700nm range that correspond to the wave band absorbed by photosynthetic pigments.

-Photoperiod – The amount of time per day that a plant is exposed to light or darkness. This may be used to control various aspects of sexual or vegetative reproductive development, including flowering.

-Photosynthesis – The conversion of light energy to chemical energy by photosynthetic pigments using H2O and CO2, and producing carbohydrates.

-Photosynthetic Photon Flux Density (PPFD) – Photosynthetically active radiation expressed as the number of photons (in micromoles) striking a square meter every second. This is one of the best measurements for determining the evenness of your lamp over the entire garden as well as the density of the radiation.

-Radiant flux – The total amount of radiation put out by a light source taking into account infrared, ultraviolet, and visible light.

Why should you buy Green-Oxygen?

Grow your own plants (winter, Indoors, Shaded area...). All our products are tested on a variety of plants and guaranteed for maximum growth satisfaction.

Easy to set and operate by any person, without any technological or agronomic background.

Invite your friend and receive 10%

Buy a gift card to your friends & Family